For an honest, competent historian there really is no credible disagreement that Jesus existed.  It may be a controversial question in the areas of philosophy or religion.    Yet, the ancient historical evidence, both Christian and pagan, for Jesus of Nazareth is overwhelming.  There is no real debate.  Secular and religious scholars agree that Jesus was a real person in ancient Israel with a real following.

Was Jesus a real person?  Historians almost universally agree He was.

Are we surprised by that?  I was when I first explored the issue.

As a historian, I was amazed at the number and variety of reliable ancient sources that confirm the life of Jesus. The ancient secular sources that I studied in college to learn about the intricacies of the Roman Empire mention Jesus and the early Christian church.

As a lawyer, I was greatly impressed by not only the amount but the reliability of the evidence. A good portion of the witnesses testimony preserved was in the form of uninterested or adverse witnesses.  In a Court of Law, these are witnesses who range from having no connection or sympathy with the cause they are testifying on behalf to those who are outright opposed to it.  It is like having the Police Commissioner providing an alibi for a professional criminal at a trial.  The fact that it is so unlikely that the source supports the case makes the evidence offered even more credible.

Given this, it shows the inherent bias of our culture.  One of the most clearly attested lives in the ancient world is still up for questioning.  There is more evidence for Jesus than most other ancient historical figures.

What is the evidence?  Let’s start with an overview of the Christian Sources.  I will add the secular sources in a later post.  Part II dealing with the Roman Secular Sources is Was Jesus a Real Person? The Secular Sources 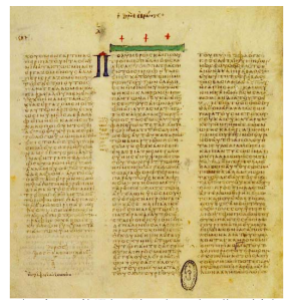 Was Jesus a real person?  The Christian Sources

As can be expected, the Christian sources for Jesus are abundant.  The sheer amount of written documentation from a historical perspective, though, is still quite surprising.

First, we have the Gospels and the letters of Paul, John, Peter, James, the writer of Hebrews and Jude that are contained in the Bible.  These were originally separate works of the individual writers that have survived since the time of Jesus.  There are no comparable contemporary ancient works attesting to the life of any other individual in existence.  The Bible contains accounts from a variety of sources and is amazingly well preserved and documented.  The early works of the church that became the Bible at very least show that a group of disparate authors wrote that Jesus was a real person.  Peter and John are said to have been friends and disciples of Jesus.  James was the brother of Jesus.  Luke states clearly that he not only accompanied Paul on his missionary journeys but that he thoroughly investigated the materials for his Gospel and for Acts.  These are a lot of witnesses offered in support of Jesus.

We also have the letters of the early church fathers dating back to shortly after the Apostolic period.  These were written by guys who did not meet Jesus in person but did know those who witnessed Jesus personally, the first disciples.  Polycarp, for example, was said to have been a student of the Apostle John.  Copies of his letter to the Philippians, which dates from around 110 AD, remain in existence.  We also have works from Clement of Alexandria and Ignatius of Antioch, contemporaries of Polycarp from approximately the same time period.

To these works are added the multitude of similar letters that come in the decades that follow.  They reveal that even if we did not have the Bible itself, there is ample evidence of the impact of Jesus starting in the decades immediately after His death and resurrection.  The letters contain specific quotations from Jesus’ teachings to the extent that we can learn the doctrines of Christianity from them alone.  Papias, Iraneus, Justin Martyr, Origen, and many other early Christians wrote extensively about Jesus, the faith, and our core doctrines.  The documentary evidence is substantial.  An excerpt from Polycarp:

Wherefore gird up your loins and serve God in fear and truth,
forsaking the vain and empty talking and the error of the many, for
that ye have believed on Him that raised our Lord Jesus Christ from
the dead and gave unto him glory and a throne on His right hand;
unto whom all things were made subject that are in heaven and that
are on the earth; to whom every creature that hath breath doeth
service; who cometh as judge of quick and dead; whose blood God
will require of them that are disobedient unto Him.

The number of people alive today who knew Martin Luther King, Jr personally is declining with the passage of time.  Yet, even if we put aside what King himself wrote, due to people recording their recollections and others hearing their stories, his historical place will surely be memorialized.  I never met the man, but there are too many people who knew him directly or whose parents or grandparents marched with Dr. King for me to believe that he did not exist.  These Christian writers were in a similar circumstance.

Does this guarantee the truth of the accounts?  No, but it does become clear that many people who were in the position to observe Jesus believed it and recorded their observations at the appropriate time period.  Add to this the internal evidence from the letters and Scripture that has been confirmed through archaeological means and it is an impressive collection.  Pontius Pilate was believed to have been a figment of the imagination of the writers of the Gospels until clear archeological evidence confirmed his existence.

This is only a small sample of the existing evidence for the man Jesus.  If we are struggling with finding faith or with our faith, I pray that this would be a starting point for a full investigation of the issue.  As a person whose livelihood depends upon scrutinizing facts and weighing evidence, once I began a full investigation of the historical Jesus my faith only grew stronger.  There is no other single man whose fingerprint is so clearly present throughout the historical record.  He conquered the most powerful Empire in all of history without a single army.

Was Jesus a real person?  Yes, most certainly!  And so much more than that!

A Calvary Chapel in Maryland

The Key to Dramatic Transformation as a Disciple

Disarm this 1 “Scary” Bible Verse and Change Your Life

Reclaim Rest in Christ by Rejecting the Expectations of Man